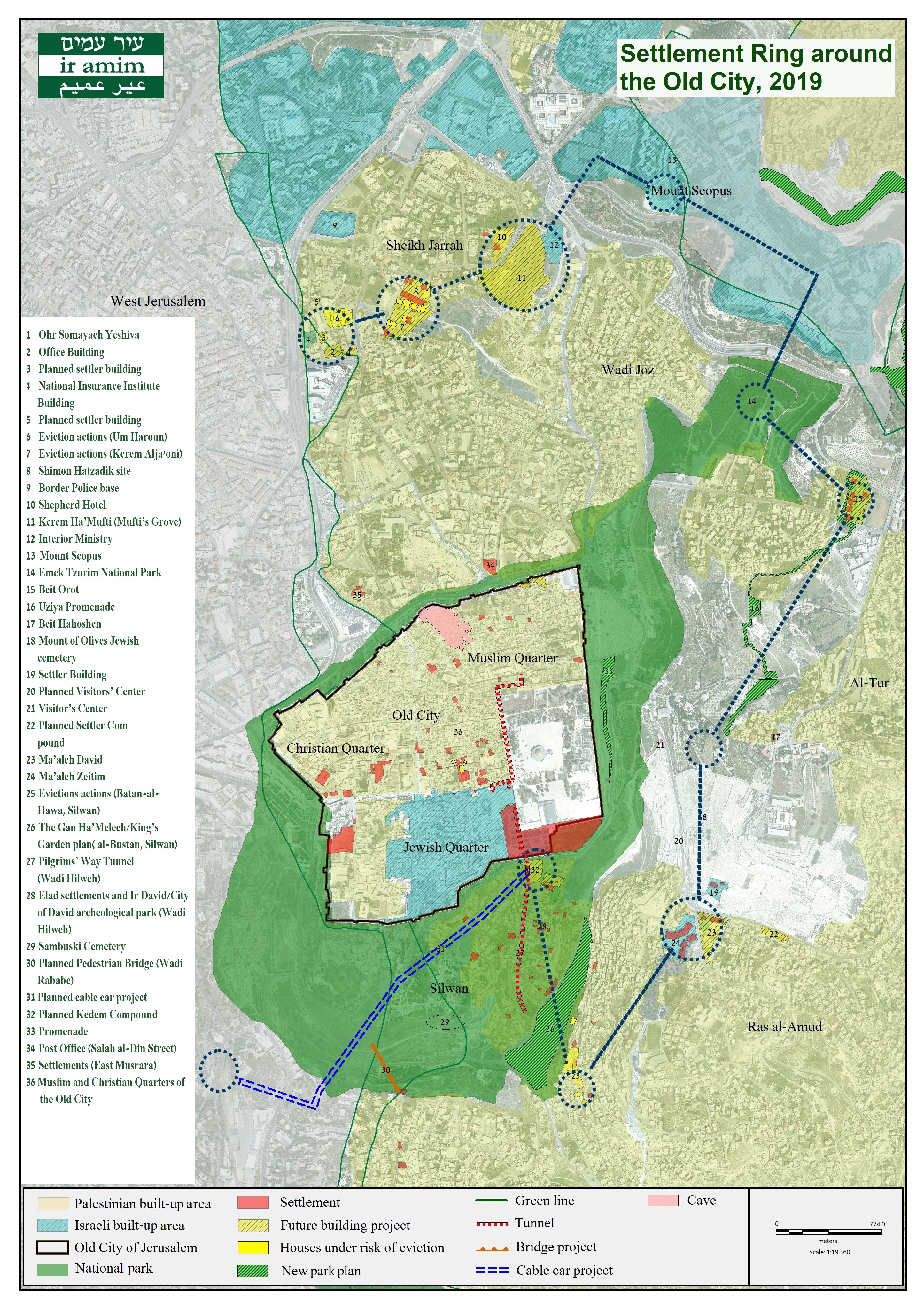 Ir Amim’s latest map, “Settlement Ring around the Old City, 2019,” graphically illustrates the accelerated, intensifying chain of new facts on the ground in the most historically contested and politically sensitive part of Jerusalem: the Old City and adjacent ring of Palestinian neighborhoods. In addition to a mounting number of state-sponsored settlement campaigns inside Palestinian neighborhoods – settler initiated evictions of Palestinians, takeovers of their homes, and the expansion of settler compounds – touristic settlement sites function as key points along a ring of tightening Israeli control.

The population density in the built-up areas of the Old City limits Israel’s ability to advance plans for residential settlements as a means of altering its demographic character.  After more than 50 years of Israeli control over East Jerusalem, nearly 100,000 Palestinians live in the Old City and the surrounding neighborhoods and at most 6,000 Israelis, 3,000 of whom live in the Jewish Quarter of the Old City.  In grappling with this demographic reality and with the symbolic value of a space holy to three religions, non-residential projects – especially those targeting tourism and archeology – assume a central role in Israeli settlement policy.

The privatization of project management to nationalist settler organizations enables the Israeli government to exploit tourism as a tool for reinforcing settlement initiatives in the Old City and its environs, erasing the significant Palestinian presence there, promulgating the idea of the entire area as an Israeli environment, and imposing a nationalistic Israeli character that blurs the multi-religious and multi-cultural nature of the space, primarily to the detriment of the Muslim sites and presence. Ultimately, this use of national parks and tourist sites serves the goal of transforming the Palestinian neighborhoods in and around the Old City – including Silwan, A-Tur, Ras al-Amud and Sheikh Jarrah – from a densely populated Palestinian area into one sprawling tourist site that bolsters Israeli control of the area and access to it.

Despite their tremendous political and environmental sensitivity, plans are now being fast tracked, some outside of appropriate planning channels and with limited public participation, in service to decidedly political considerations and with the prominent involvement of settler associations. The new map and accompanying map notes detail the numerous projects and eviction cases now advancing.   Over the past several weeks, multiple developments have aligned to demonstrate this escalating trend:

The private settlement compounds being built in the Old City and around its circumference (where roughly 2,500 settlers are now quartered) cannot be quantitatively compared to settlement building in the ring neighborhoods of East Jerusalem but qualitatively, they have disastrous implications for Palestinians in Jerusalem, the relationship between Palestinians and Israelis in city, the two state solution, and the Old City as home and historic center of the three major monotheistic world religions.

It is vital that the traditional calculus of settlement building be readjusted to 1) treat these coordinated efforts to consolidate control of the Old City and surrounding Palestinian neighborhoods with the same urgency afforded to settlement building throughout the whole of East Jerusalem; 2) ensure a holistic response that regards private settlement inside the Old City Basin and touristic settlement not as individual phenomena, but as multiple elements of a unified and politically lethal strategy to unilaterally entrench Israeli control and undermine an agreed political resolution on the city.

This escalation of new facts on the ground in lead-up to the anticipated unveiling of a US peace initiative only further erodes opening conditions for any future plan – the viability of which, among other conditions, will be contingent on the principle that alongside West Jerusalem as the capital of Israel, East Jerusalem must serve as the capital of the future Palestinian state – as an organic territorial, demographic, and communal entity connected to the Old City Basin.