Advancements along Settlement Ring around the Old City

Over the past month, there have been several developments in touristic settlement projects at key points along the eastern side and southern edge of the intensifying ring of settlement activity around the Old City Basin:

On June 3, the National Infrastructures Committee (NIC) approved the plan (TTL. 86) for the controversial cable car which will run from the refurbished Ottoman-era train station complex ("The First Station") in West Jerusalem to the roof of the planned Kedem Compound in Silwan, a massive visitor center and future Elad headquarters. In May 2018, the government approved 200 million shekels to build the cable car; the plan has since been fast tracked through the NIC, circumventing the traditional planning process in an attempt to stifle public objections. Represented by authorities as a public transportation project to facilitate access to the Western Wall and Old City, the cable car will channel thousands of people a day over an invisible Green Line to the epicenter of Elad’s touristic settlement operations and divert unwitting tourists from the traditional Old City entry points via Jaffa and Damascus Gates, depriving Palestinian businesses from one of their main sources of income.
On June 2, Jerusalem Day, a new settler-affiliated project (yellow star across from #14 on map) was inaugurated in the presence of Jerusalem Affairs Minister, Ze’ev Elkin, at a location coined Mitzpe Hamasuot (Masuot Lookout), situated just north of the settler-run Beit Orot Yeshiva (#15 on map) in A-Tur on the Mount of Olives. The site will become the new home of the Temple Mount Sifting Project, one of the Temple Movements’ activities, which had been active in the Emek Tzurim National Park until approximately two years ago after running out of funds. While the Israeli government recently decided to allocate 5 million NIS for project development in April, given its proximity to the Israeli elections, the budget's issuance was not approved at the time, suspending it until after government formation.

The sifting project was nevertheless re-launched on June 2 under private funding in the strategic location of Mitzpe Hamasuot, a fenced off area of roughly 2.5 dunams at the northern edge of A-Tur. According to the Israeli Land Registry, it is registered property under the Everett Foundation, an organization established by the late Irving Moskowitz for the purpose of funding settler initiatives in East Jerusalem.

Ir Amim uncovered numerous violations of unpermitted construction in the area, some of which had been carried out recently for the purpose of the sifting project. Following Ir Amim’s filing of a complaint with the Jerusalem Municipality, a planning inspector issued a warning against the illegal structures, yet no concrete steps have been taken, and the facilities opened as planned. It is not the first time Israeli authorities have overlooked building and planning violations by settler-operated projects.

The plan’s (TPS. 470484) recent approval will most likely lead to the advancement of the construction process. While the plan is under the purview of the Municipality and Jerusalem Development Authority, the Municipality’s hiring of Arie Rahamivov, the architect for Elad’s planned Kedem Compound in Silwan, indicates settlers’ likely involvement in the project. Elad operates another visitor center on the Mount of Olives in close proximity, one of a growing number of tourist sites in the Old City Basin under its management.
The District Committee discussed objections to the Uziya Promenade plan designed to connect the Beit HaChoshen settler compound (#17 on map) with the Beit Orot Yeshiva and settler enclave (#15 on map) both located on the Mount of Olives in the Palestinian neighborhood of A-Tur. This is a major segment within the full-length promenade intended to extend into the Jewish cemetery (#18 on map) on the Mount of Olives. Objections to the plans (TPS 247338 and TPS 430231) were submitted by Palestinians with claims of land ownership as well as the Custodia Terra Santa, which asserts that the plans will require expropriation of land owned by the Catholic Church. While the District Committee ordered the promenade’s width narrowed following discussion of the objections, the modification only addresses a small portion of the concerns raised in the objections. An additional session at the District Committee has been scheduled for June 25 to allow those who have submitted objections to respond to the plan’s modification before the committee makes its final decision on the plans’ approval.

The close overlap of recent developments along the chain of settlement compounds and touristic settlement sites around the Old City and its environs illustrate an acceleration of efforts to consolidate the band of Israeli contiguity and control around the Old City Basin. As the cable car plan was approved, bolstering the southern perimeter of the emerging settlement ring around the Old City, the advancement of the Uziya promenade and approval of the new visitor center at the Jewish cemetery on the Mount of Olives shore up the settlement operations along the North-South axis of the band. In tandem, the new sifting project creates a key link on the East-West axis between Mitzpe Hamasuot and Emek Tzurim National park, running eastward from the Old City toward the planned Mount Scopus National Park, which will expand to the Eastern boundary of East Jerusalem and the tip of E1. 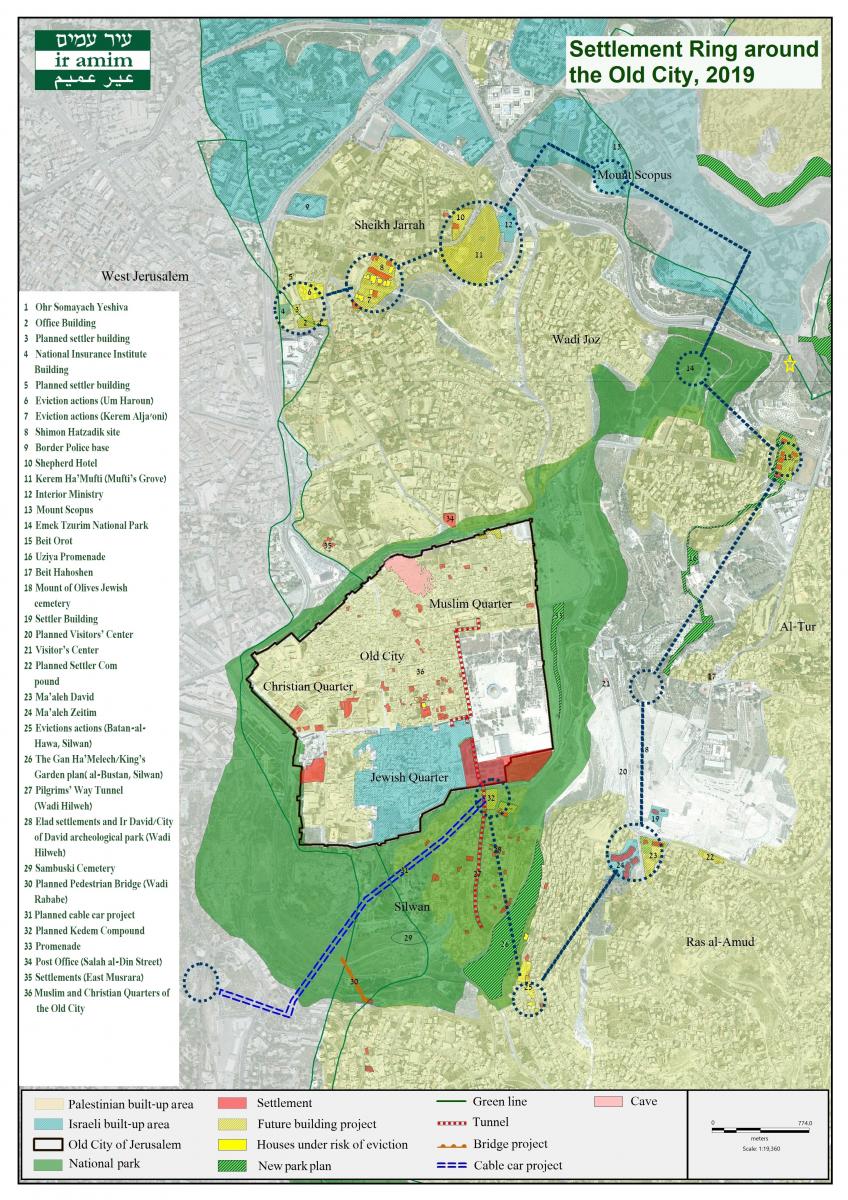