As part of the intensifying belt of settlement activity in and around the Old City, there has been a recent burst in touristic settlement projects in the area of Gei Ben Hinnom/Wadi Rababe as well as developments within Silwan illustrated in Ir Amim’s updated map below, offering a zoomed-in perspective of the space. While a small section of Gei Ben Hinnom/Wadi Rababe is situated in West Jerusalem, the remaining portion is located in East Jerusalem adjacent to Abu Tur and Silwan.

Further blurring the Green Line, these projects are being implemented around the vicinity of the planned cable car recently approved (#31 on the map), which will together create a more seamless link between West Jerusalem and particularly Silwan and divert tourist traffic from its traditional routes via Jaffa and Damascus Gates: 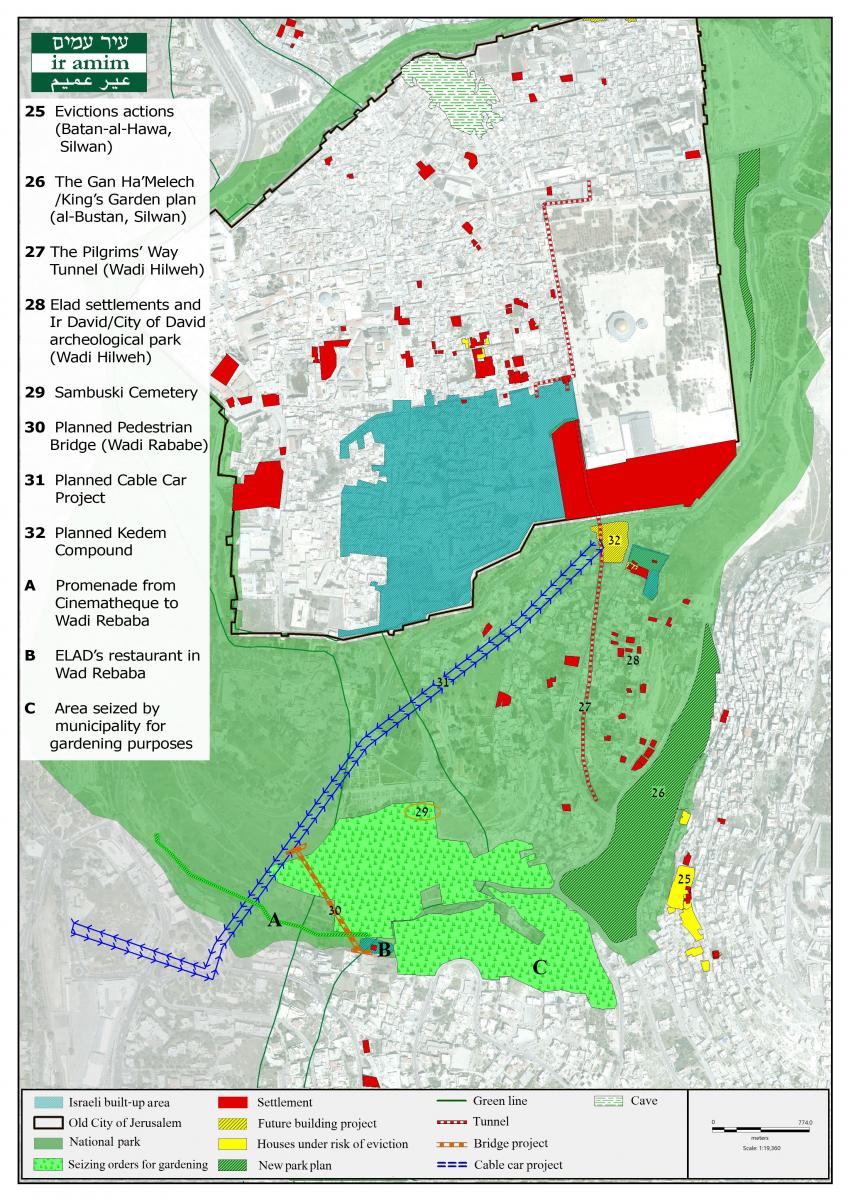 FOR A HIGH RESOLUTION MAP, LINK HERE
As a means to further tighten the band of settlement activity around the Old City and its environs, the abovementioned developments are part and parcel of measures being employed to facilitate seamless and attractive access from West Jerusalem to settlement sites scattered throughout Silwan.

Portrayed as a seemingly innocuous new establishment for arts and culture designed to serve the Israeli public, Elad’s “House in the Valley” serves as an entry point into the settlement ring around the Old City. The new promenade, constructed by the municipality to aid and abet Elad’s efforts by connecting its center with the Jerusalem Cinemateque, not only enables access from West Jerusalem to an Elad-managed site beyond the Green Line, but it propagates the idea of a contiguous Israeli space, while blurring its Palestinian surroundings and diffusing the political agenda behind these efforts.

Moreover, the confiscation of privately-owned Palestinian land for purported purposes of beautification is intended to serve the Israeli public projected to visit Elad’s new complex and likely lead to additional settler activities in the area.

​The escalation of new facts on the ground and touristic settlement projects in and around the Old City Basin serve to further entrench Israel's control of the most contested and politically sensitive area of Jerusalem.
​
blog