February 18, 2020
.
On February 9, the planning department within the Jerusalem municipality opened a file for a new detailed outline plan (TPS 764936) to create a large new neighborhood/settlement in the area of the decommissioned Atarot airport. The new Atarot neighborhood/settlement (shaded area on map below) would be built on the northern edge of East Jerusalem adjacent to the Israeli side of the Separation Barrier and bordering the Atarot Industrial Zone towards the south, further fracturing the Palestinian space around it. It is worth noting that this area was theoretically designated as a future “Palestinian tourism zone” within Trump’s so-called peace plan. 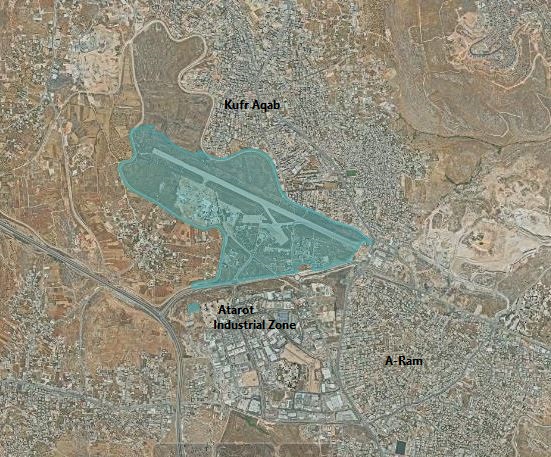 If constructed, this would constitute the first new Israeli neighborhood/settlement built over the Green Line in East Jerusalem since the establishment of Har Homa two decades ago. Although Palestinians constitute nearly 38% of the city’s growing population, no new Palestinian neighborhood has been planned and built since 1967.
.
It is important to emphasize that construction of this new neighborhood/settlement (also marked in pale green in Greater Jerusalem map below) will create an Israeli residential area between Ramallah and Kufr Aqab and East Jerusalem, driving a wedge between Ramallah and Jerusalem from the north. Such a plan will significantly fragment Palestinian land contiguity necessary for any independent and viable Palestinian state with a capital in East Jerusalem similar to the implications of potential future construction in the E1 area to the east and Givat Hamatos in the south. These measures serve to further seal off East Jerusalem from the West Bank and reinforce Israeli control of these areas, rendering the two-state framework based on two capitals in the heart of Jerusalem nonviable.
.
The plan is being initiated by the Ministry of Construction and Housing (MOCH). The opening of the file indicates that a significant part of the plan’s respective documents have already been prepared. Further paperwork by the MOCH and the Municipal Planning Department will be required before the plan can be submitted for its first review at the Local Planning Committee, which will take at least several months. Since the plan also requires a re-parcelization (“consolidation and distribution”) process, the completion of the necessary procedures, however, may require more time.
.
The plan is designated for an area in which today are located various structures, including residential buildings where several Palestinian families reside. Encompassing 1,243 dunams, the plan has earmarked the area for massive construction, including:
The plots selected for construction according to the plan are a combination of state lands, land owned by the Jewish National Fund and privately owned land (most likely belonging to Palestinians). Due to the multiple ownerships, the land will require a re-parcelization process which is intended to be carried out without the consent of the landowners.
The neighborhood/settlement is designated for Israelis and includes plans to build synagogues and mikvehs. Although the area is situated within the municipal borders of Jerusalem, the neighborhood/settlement will essentially be disconnected from the rest of the city and rather take on the characteristic of a more isolated and detached settlement. While the Atarot Industrial Zone will physically separate it from Jerusalem, highway 443 will serve as the settlement’s main access point to the city.
.
The concept of building a residential area in Atarot has existed for many years, although no plans have been formally advanced until now. Israeli authorities have expressed intent in the past to build a neighborhood in this area for particularly the Haredi population. However, due to its distance from the city and its location between the Separation Barrier and the Atarot Industrial Zone, the Haredi community has expressed firm objections to the idea.