February 27, 2020
Today, the District Planning Committee discussed a master plan for the area of Givat Hamatos (marked in red with purple circle on map below), which was initiated by the Israel Land Authority (ILA) with the aim of increasing the amount of housing units that can be constructed in the area. This plan follows closely on the heels of the publication of tenders for 1077 residential units in Givat Hamatos as well as a sequence of other settlement-related developments in Atarot, Har Homa E (also known as West) and E1 over the past one and half weeks.
According to this new plan, 6,500 housing units would be built in Givat Hamatos, supplanting previous plans designated for this area which called for the construction of 3,400 housing units and 1,100 hotel rooms. The master plan essentially covers the same areas include in the previous plans for Givat Hamatos A, C and D with a total area of approximately 810 dunams.
As this is a master plan (holding non-statutory status), the approval process does not entail a deposit for objections, which means that by the end of today the District Committee could announce the plan’s final approval. However, its approval would not grant the issuance of building permits since the preparation and approval of detailed outline plans is required for such a measure. 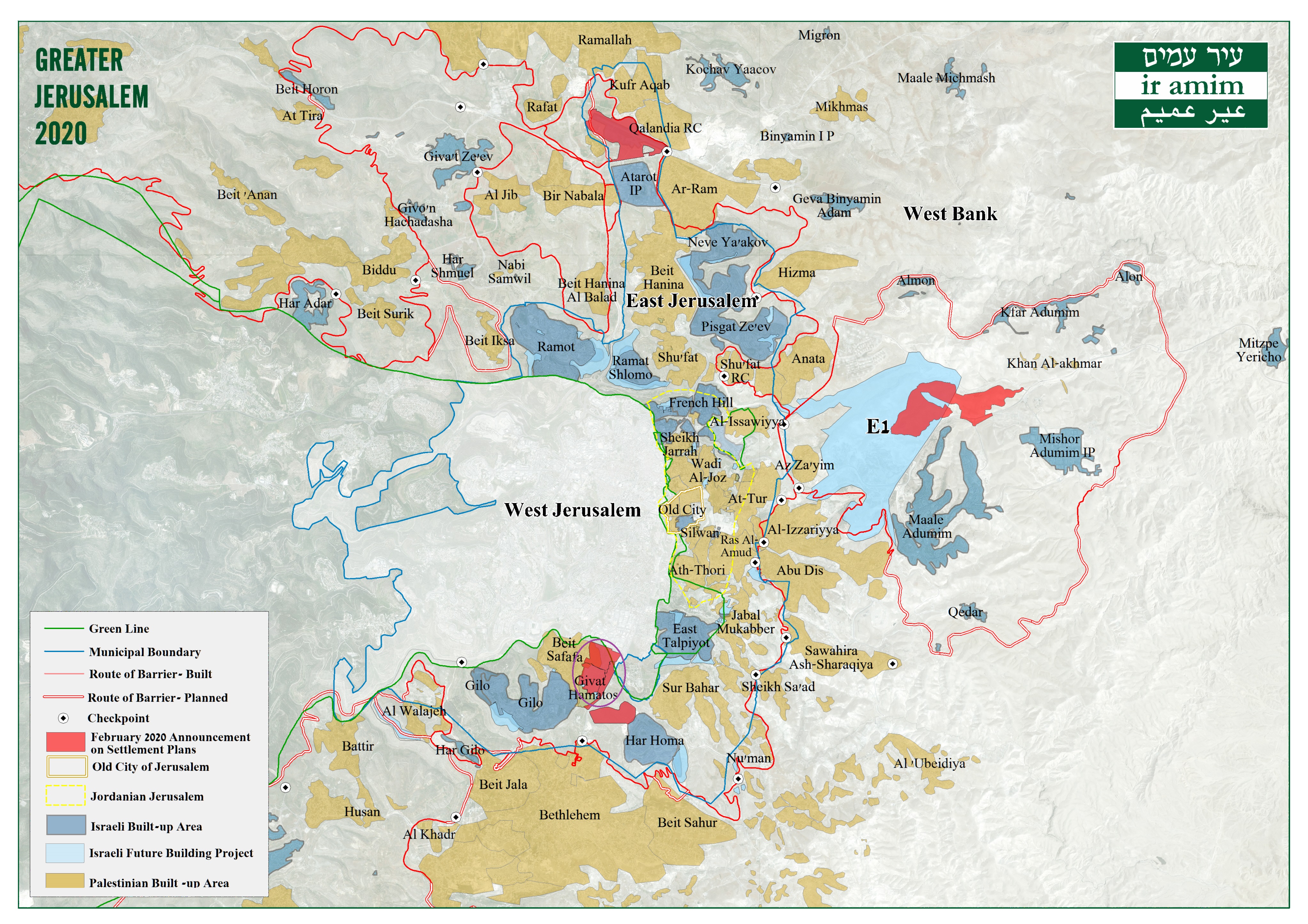 The Master Plan's Proposed Modifications to Plans for Givat Hamatos
Givat Hamatos A Plan (TPS 14295) is a detailed outline plan for 2610 housing units that was approved in 2014 and until this week has remained frozen. 30% of the land designated within the plan is privately owned, while the other 70% belongs to the state. As Ir Amim reported earlier this week, the Israel Land Authority published tenders on February 24 for the construction of 1,077 housing units on parcels of state land within the plan. It is important to note that despite the announcement of tenders, the bidding process has yet to open and the submission of bids cannot begin before May.
According to those who drafted the new master plan, it only slightly increases the percentage of construction possible in Givat Hamatos A because the division of land into separate plots does not afford more of an increase. Since a detailed outline plan is required to change the permissible scope of construction, private landowners or contractors who win the ILA tender will need to prepare detailed outline plans for their plots in order to increase the percentages of construction beyond what the plan (TPS 14295) currently allows.
Givat Hamatos C Plan (TPS 5834 C) originally called for the construction of some 800 housing units, but was rejected by the District Committee seven years ago. Much of the area is privately owned. The new master plan proposes the construction of 2,000 housing units, however, in order to build in this area a detailed outline plan is likewise required, which if drafted, can include larger building percentages based on the new master plan.
Givat Hamatos D Plan (TPS 5834D) was a plan for 1,100 hotel rooms, which was dismissed due to objections submitted by landowners of plots included in the plan. The new master plan designates the majority of this area as residential.
It is likewise important to note that the new master plan does not include Givat Hamatos B and therefore does not allow for the increase in residential construction in this area. Givat Hamatos B is actually part of the built-up area of ​​the Palestinian neighborhood of Beit Safafa. Contrary to Netanyahu's statement that he ordered advancement of construction of 1,000 housing units for Palestinians in Givat Hamatos, the new master plan does not include the area of ​​Beit Safafa. It is worth noting that some lots in the area of Givat Hamatos A and C are privately owned by Beit Safafa residents.
The Ramifications of Construction in Givat Hamatos and along the Southern Perimeter
While these advancements will not necessarily translate into immediate construction, these measures are no less alarming and require heightened international vigilance and opposition. If construction in Givat Hamatos and the new plan for Har Homa E (advanced yesterday at the Local Committee and subsequently discussed today at the District Committee) are ultimately carried out, they will create a contiguous Israeli built-up space between the existing Har Homa and Gilo neighborhoods/settlements, effectively sealing off the southern perimeter of East Jerusalem from Bethlehem and the southern West Bank. It will likewise completely isolate and cordon off Beit Safafa in the midst of a built-up Israeli area.
Constituting a long term strategy of Israeli governments, construction of large settlements is employed as a means to increase the Israeli population in Jerusalem while rupturing the Palestinian space and unilaterally determining the boundaries of Jerusalem. In doing so, Israel erodes conditions for the establishment of a Palestinian capital in the city and the prospect of a negotiated agreement based on a viable two-state framework.
תגיות:
Greater Jerusalem
Givat HaMatos
Israel Land Authority
Har Homa
blog